Shraddha Kapoor, born on 3 May 1987 is an Indian actress who works in Indian Film Industry. She used to be a scholar in her school days. Along with acting, she has sung several songs for her film. In 2010, she made her debut from the film Teen Patti but got wide recognition after playing role in Aashiqui 2 which was a super hit and made Shraddha a highest-paid actress. After that, she gave so many hits. 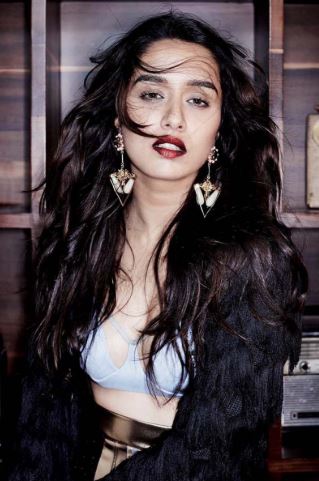 Shraddha Kapoor was born and brought up in Mumbai. She is half Marathi and half Punjabi as her father is a  Punjabi and her mother is a Marathi. She is the daughter of famous actor Shakti Kapoor and Shivangi Kapoor. She has an elder brother Siddhant Kapoor who also works in this Film industry. Belonging to a family who has a lot of actors, she desired to be an actor from her young age only. She used to dress up and rehearse in front of the mirror when she was a child. She is the great-niece of singer Lata Mangeshkar and Asha Bhosle from where she got her singing skills.

She made her debut from the film Teen Patti in 2010 opposite Amitabh Bachchan, Ben Kingsley, and R. Madhavan for which she got nominated for Filmfare awards. However, the film failed to do well in Box office. After that, she did Love Ka The End which was also a flop in box office but again her performance got positive reviews and she won an award for the same. The major box office success for her was Aashiqui 2 where she played the role of Aarohi Keshav opposite Aditya Roy Kapoor. After that, she gave many hits like Ek Villian, ABCD, Stree, Half Girlfriend and many more.

Being in the film industry, it is impossible not to have rumors about relationships and boyfriends and so does about Shraddha’s life. There were rumors of Shraddha with Aditya Roy Kapoor, Farhan Akhtar, and Rohan Shrestha for which they never confirmed.

She has always supported charitable associations along with her career. She has also sung many songs and performed stage shows. She is the Brand ambassador of several products and walked in Lakme fashion week many times.

She also has her own line of clothing called Imara in association with Amazon.com

She has been nominated for Filmfare award for Best Female Debut in Teen Patti (2011), Best Actress for Aashiqui 2 (2014) and many more.