Good Morning People! So here I am with a lot more gossips for you! Bollywood is filled with so much interesting people and their interesting stories (obviously)! Any idea about the new gossips going on? Well, you can have a look …

Vidya Balan, one of the most gorgeous actresses of bollywood, who is recently busy in promoting her film ‘Begum Jaan’ is constantly being asked about her family plans as she’s married! (Typically orthodox thinking, isn’t it?) 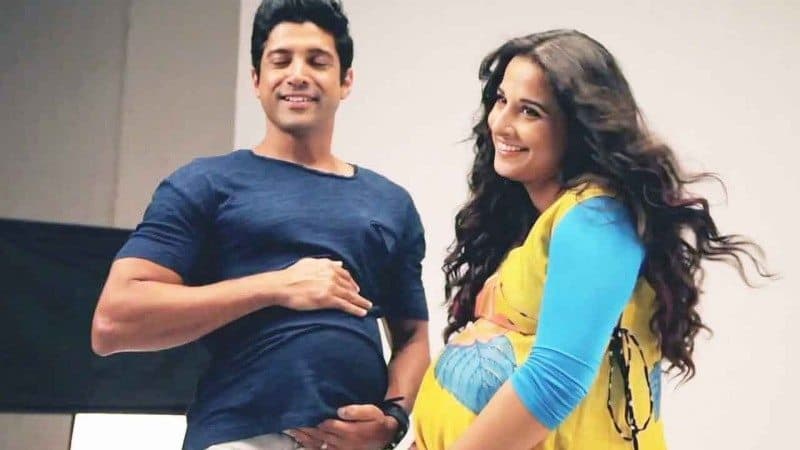 However, like every other Bollywood actress, She, too, is fed up with these questions and said- “I don’t think it’s anyone’s business except mine and my husband’s (producer Siddharth Roy Kapur). It was a serious invasion on our privacy, but our country is such. Neighbours and relatives [constantly] ask us (unnecessary questions). The day I got married, one of my uncles told me at the wedding venue, ‘Next time I see you [her and Siddharth], I should be looking at three people, not two’. This was even before our wedding pictures could be clicked. I politely laughed because we hadn’t even decided on our honeymoon destination then.”

“What is this baby obsession? I am not a baby-making machine. Anyway, the world population is on a rise. If some people don’t have children, it’s fine,” she says.

Well, We understand you Vidya!!

As we all have heard about the ongoing fight between kangana and karan (about when Kangana called the filmmaker, Karan Johar –‘flag bearer of nepotism’)…Yea u read that right, It is still not over!! 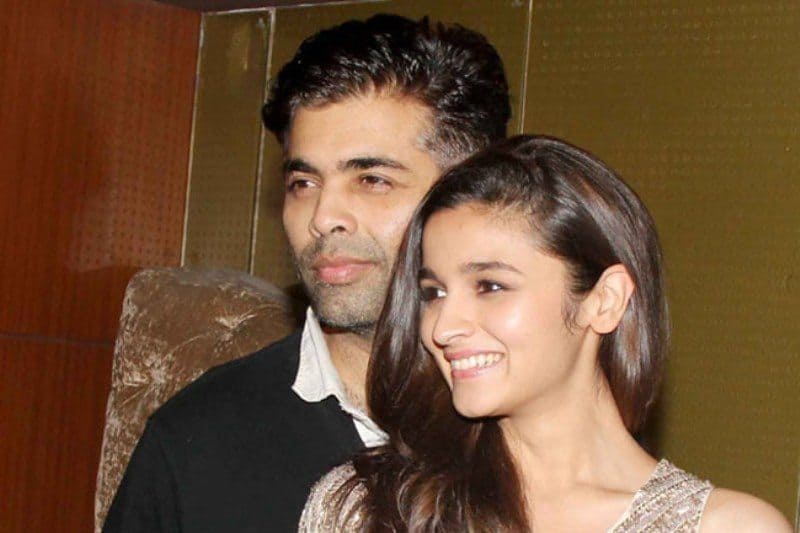 Alia Bhatt, who just turned 24, was asked about this comment and all she said was that she feels that everyone is talking  way too much (unnecessarily) about it, “We are talking too much about it. We need to stop,” she said.

Yesss, That’s the news here… and she is none other than Karishma Tanna!! As the fine actor, Sanjay Dutt’s life has always been full of events, his biopic is receiving a lot of interest from the Indian audience.

The biopic is directed by the one of the best directors of Bollywood, Rajkumar Hirani and is starring Ranbir Kapoor. Sounds exciting, isn’t it?!! 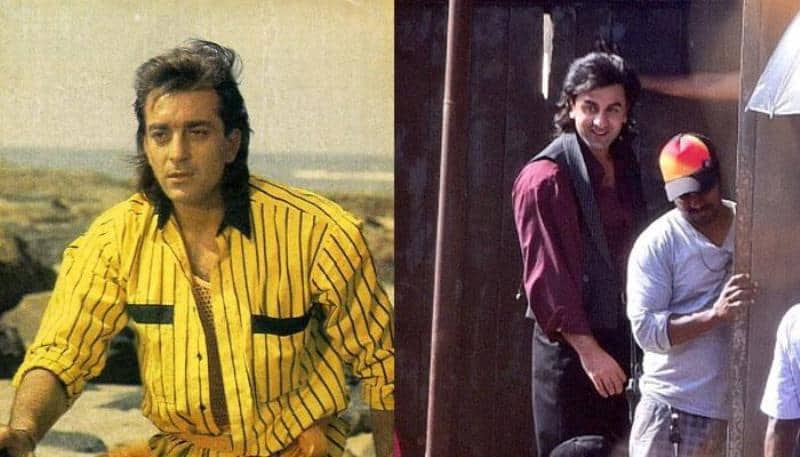 Well, Karishma Tanna has been assigned one of the lead female role in the biopic. Although her role is not yet revealed, but are you excited about the on-screen romance of this Jodi?!!

When Mira spoke about motherhood and how she absolutely loves the time that she gets to spend with her dear daughter, she also mentioned that she is not working, as her baby is not a puppy to be left alone. This comment disappointed a lot of working women and it raised a lot of criticism.

However, Shahid Kapoor has a perfect response to this criticism, supporting his wife, he said, “Mira started the conversation by saying that these are her personal comments. I don’t think she made a direct comment on anybody or any category of women. I think she was saying from a very personal standpoint. Mira is speaking for a section of women who really aren’t being represented. There are times when those women feel like they shouldn’t be celebrated and by that I mean women who might not be doing a job, who choose to stay at home, have a baby and take care of that baby and consider that something important enough to do at a certain stage in your life.I understand people have a strong point of view and they can get hurt about things but I think we are in a time where everybody is getting hurt about everything. I, honestly, don’t think it makes sense to keep everybody happy. We are also in a time where if anybody, who is important or is being given importance, says something, a lot of people want to gain importance by saying something against them.” Also, he added-“I am very proud of what she said. She did a great job. I think this is what it means to be a celebrity. Now, she will have to get used to a little bit of criticism. She is a strong girl, she takes it with a pinch of salt. I think, she will be good.”

Well, He is such a dear husband!! We love you Shahid!!

Alia Bhatt’s last year was a pretty successful year fr her. She is now counted as one of the top actresses of Bollywood and is loved y every kind of audience.

She is a cat lover and has another cat too!!   She posted a picture on Instagram of herself with the cat, captioned as, “The newest member of our family. Happy Birthday to me” 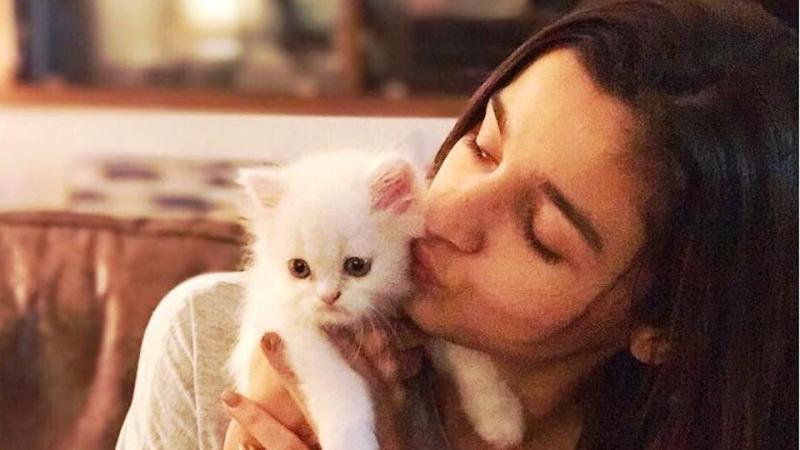 Bollywood’s chocolate boy Varun Dhawan who has always been quiet over his relationship status, has now opened-up like never before! In an interview with Filmfare, Varun Dhawan told that he is in a relationship with his childhood sweetheart, Natasha Dalal, a designer.

Now with the release of Badrinath ki Dulhania, Varun is headed to a short vacation with his lady love!! Isn’t that cute?! 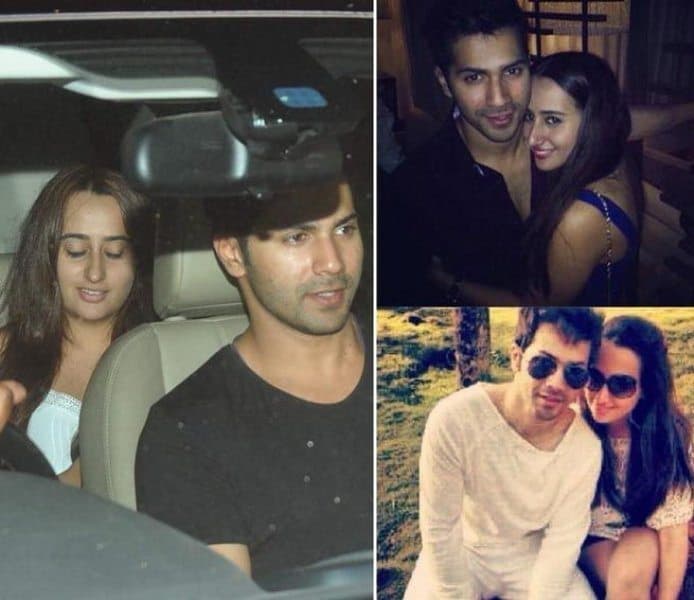 The “battle” between Kangana and Karan has been on the news for a while now! Many bollywood actors and actresses shared their views on the same, including Alia Bhatt and Sonam Kapoor.

On asking Aamir Khan about the matter, He said that he would not comment on the “battle” but he definitely had something to say about the “nepotism” in Bollywood-“It is a natural human emotion to try and help people you love and care for. It doesn’t have to be someone from your family. In my work, I strive to not allow that feeling to interfere. I feel that it’s my responsibility as a creative person towards the audience and give them the most importance. I try to not bring in (those) emotions in my work.” 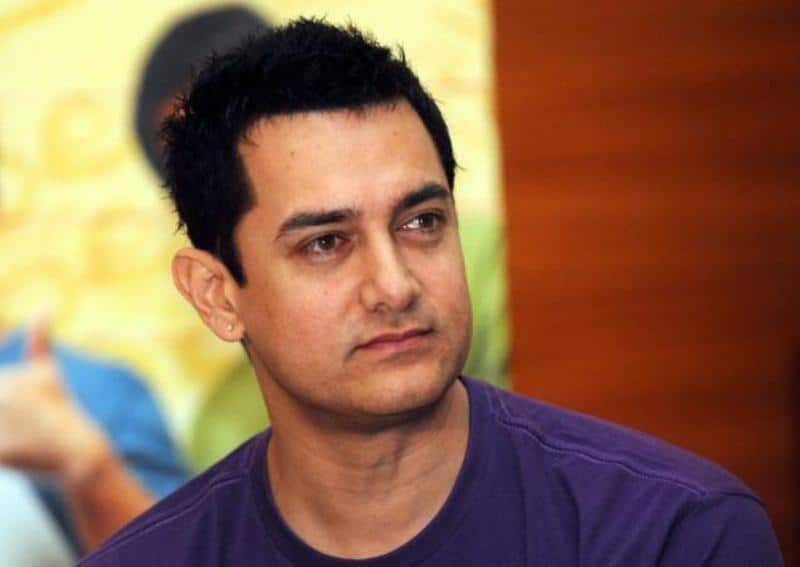 One of the most terrific actress of Bollywood, Priyanka Chopra  is now a famous global icon!She was called as “Hollywood’s most bankable badass” on the cover of Marie Clare  this month!!

She is soo amazingly gorgeous and yes, the only one who got Jimmy Fallon to play on the sets of his show!! 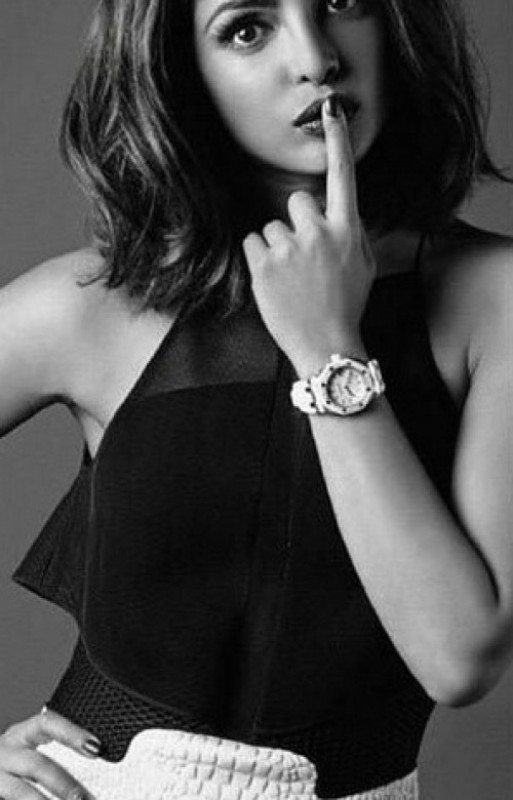 In an interview , She was asked about her Love-life and she said- “Iam not someone who looks for love. I don’t believe in making it happen. My life has been shaped by so many serendipitous moments so far,, I feel like, why screw with a good thing?”

Well, we couldn’t agree more with you Priyanka!

Badrinath ki Dulhania which released on 10th of march, starring Varun Dhawan and Alia Bhatt has minted over Rs 60 Crores in India. Varun and Alia couldn’t have asked for more!!

Their very first film of 2017 is a massive hit at the box office! It has crossed the one week’s collection of big hits like Kaabil, Raees and Jolly LLB2.

This is Varun and Alia’s third movie together. Ever since their first movie, ‘Student of the Year’ the duo is loved by the audience. They’re said to become the most loved on-screen couple in bollywood!!

Mira Rajput tied knot with one of the most charming man of bollywood, Shahid Kapoor and became a mother soon after. She is a delhi-based young girl, in her twenties and now, a mother too! 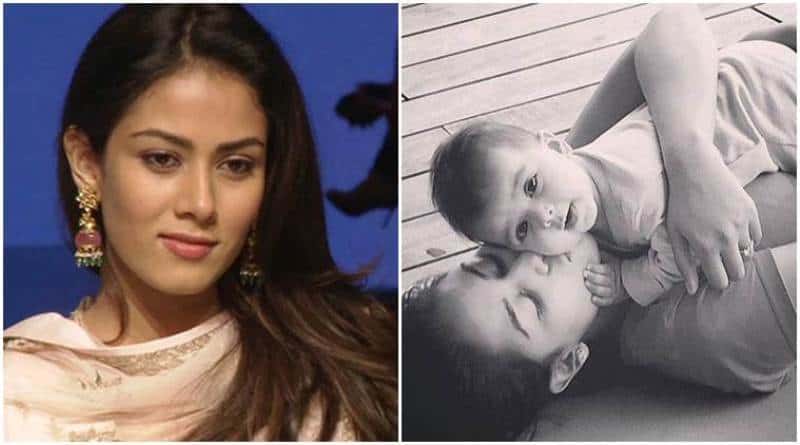 Being so young, she says she wants to enjoy her motherhood and wants to spend all her time with her darling daughter, Misha!! She said (at a recent event), “ I had a tough pregnancy and I would not want to spend, I mean I went through those five months of a difficult time to bring my daughter into this world, both of us together. So, now I want to spend every moment that I can with her and I think that I am… there is a set of responsibilities that are on my plate and I feel that at my age, I have a lot more energy, I have a lot more… I have my future ahead of me so I can finish all of my responsibilities and then I have nothing in my way. You know I can raise my daughter, I can be a good wife, I can set my house the way I like, not in terms of the way things should be but the way a home must be within its values and ideals. So, nothing will stop me after that but I love being at home, I love being a mother to my child, I wouldn’t have it any other way… I wouldn’t want to spend one hour a day with my child and rush off to work. Why did I have her? She is not a puppy, you know. I want to be there for her as a mother, seeing her grow up has, cannot be quantified.”

Well, we couldn’t agree more! It really seems like an amazing start to motherhood <3

Kangana Ranaut’s and Karan Johar’s controversial fight has been in the news for a while now. Well, they are in no mood to stop this  anytime soon!

Bollywood actors too have takes on this whole episode! When asked from Sonam Kapoor, (although she did not hear Kangana’s statement) she said that she agrees with the nepotism in Bollywood. She said that Kangana keeps saying a lot of stuff and is very entertaining. She also added that she is looking forward for more of Kangana’s interviews! 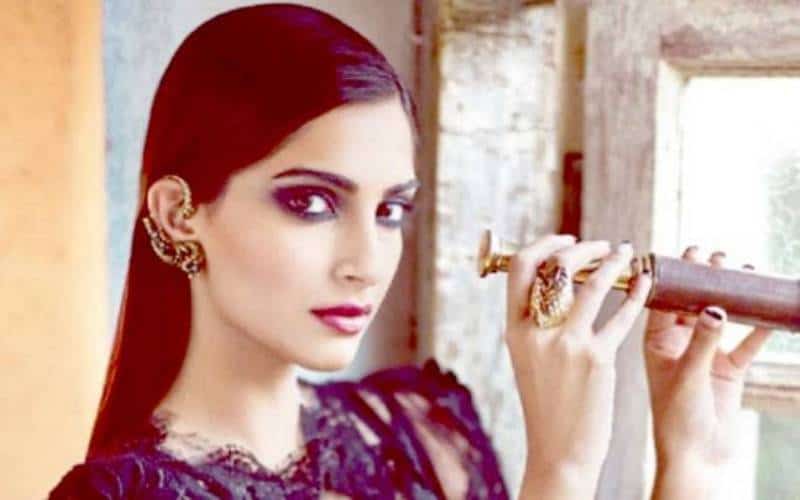 When she was made aware of the entire basis of the so-called “fight” she just said, “I wish I had done only one film with him (Karan Johar).”

We agree with you Sonam!

Kriti Sanon has denied all her dating rumors ever since she came to bollywood but her sister, Nupur Sanon doesn’t seem to follow this way!

Rumors are that Nupur Sanon seems to be dating Sushmita Sen’s brother, Rajeev Sen!! The two met at a party and have been seeing each other since then.

They make a cute couple, don’t they?

The bachchan family is usually known for its “festive spirit” on Holi and Diwali! Infact, every year they host the parties on such festivals and those parties are one of the most talked thing in B-town.

However, this year, there would not be any celebrations. Aishwarya Rai’s father, Krishna Rai is in a critical condition and is admitted in ICU in Leelavati Hospital. The family is quiet tensed about his ill health and is taking care of him in all the way possible and therefore, there will not be any celebrations!

Get well soon, sir. We pray for your speedy recovery. 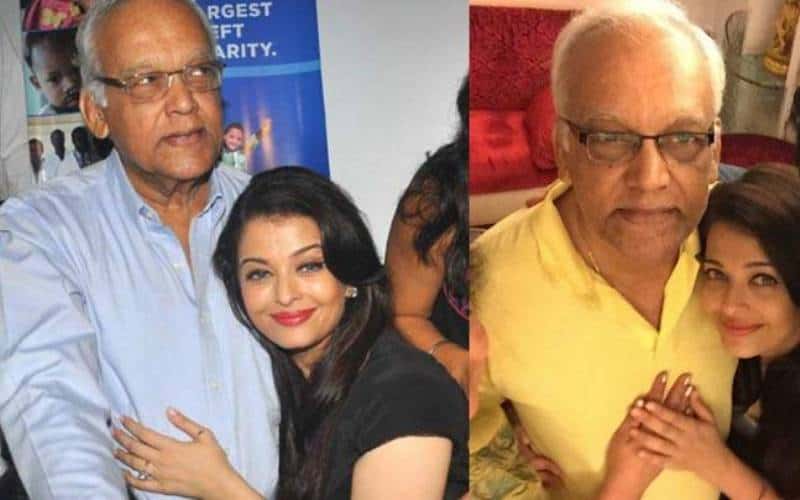