Anu Emmanuel is an actress and model who works majorly in Tamil, Telugu and Malayalam movies. Though she has American nationality by birth, she comes from a well-known Malayalam movie producer family. This 22 years old actress is the proud owner of ‘million-dollar smile’ as per the critics. Her brilliant expressions brought her the taste of success in a very small age of 14. Her fitness quotient and style sense make her mark in the star-studded Malayalam movie industry. 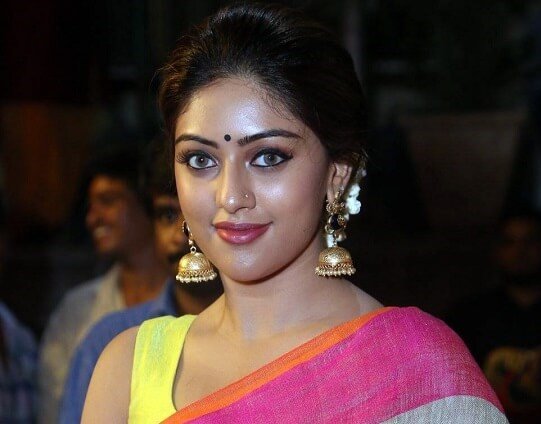 Anu was born to Thankachan Emmanuel and Nimmy Emmanuel on 28th March 1997. Her father is a famous film producer in the Malayalam movie industry. Her mother is a homemaker. Though Anu comes from a Kerala based Malayalam family, she was born and brought up in Dallas, USA. She has a brother named Allen Emmanuel. Famous Malayali actress Reba Monica John is her cousin.

Anu is single till now but it is being said that she is in relationship with Telugu actor Raj Tarun. In 2017 movie Kittu Vunnadu Jagratta Anu and Tarun shared the screen as main leads and their on-screen chemistry worked in favor of the movie. The relationship rumors started from the closeness of the two on the sets. In the upcoming chick-flick movie Iddari Loka Okate we might see the couple together again but the news is not confirmed yet.

Anu completed her schooling from Dallas, USA though her earlier school years were done in India. During her earlier school years, she appeared in 2011 rom-com movie Swapna Sanchari as a child artist. After this, she returned back to the US to finish high school. She did her graduation from Texas, USA. Her major was psychology. During her high school course, she was offered a role opposite famous south movie hero Dulquer Salmaan in the movie Charlie. Due to her exam schedule, she had to reject it.

In 2011, Anu debuted as a child artist in Malayalam romantic comedy Swapna Sanchari from her father Thankachan Emmanuel’s production house. Her character Ashwathy, the daughter of the main leads was praised and the movie made it big. She was seen again in Abrid Shine’s Action Hero Biju (2016) movie opposite to Nivin Pauly. In 2016, she appeared in Telugu movie Majnu against Nani. Majnu was successful in the box-office and bought her Producers Guild Film Award in the Best Actress category. In 2017, she played the main lead in Kittu Unnadu Jagratha against Raj Tarun, Tamil action thriller Thupparivaalan, Oxygen against Gopichand. In 2018, she signed for three big banner films; Pawan Kalyan’s Agnyaathavaasi, Allu Arjun starer Naa Peru Surya and Shailaja Reddy Alludu against Naga Chaitanya. She will next be seen in two Tamil movies Namma Veettu Pillai and Naan Rudran.

In 2017 movie Comrade in America, Anu was selected as the female lead against Dulquer Salmaan but after a few days of shoot, she was replaced by Karthika Muralidharan. Rumour has it, Anu created a fuss in the set whenever the director asked for retakes. Regarding this matter, Anu allegedly made a comment on Malayalam movie industry’s attitude on actresses which caused a huge controversy. Anu took the road to complete denial through social media.

What are Different ways to Style a Saree?

What are Kharbuja Fruit Benefits ?

What are the Benefits of Going Vegan?

Which are the Best Lipstick Brands ?

How to Make Paneer Tikka Masala at Home...

What are Summer Wardrobe Essentials 2019?

How to Use Diaper Rash Cream for Acne...

Why Cold Pressed Juice is Great For You...

What are Benefits and Side Effects of Drinking...